The Fellowship will be awarded to qualified applicants based on the following criteria:  Recipients shall be College of Education Ph.D. students whose research is focused on one or more of the following:

(b) It is the Donor’s intention that the funds provide substantial financial assistance to at least one single student. Recipients are normally selected during the Spring semester, with awards to be effective the following Fall semester. 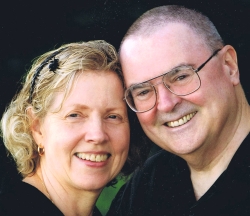 Biographical Information:
Jere and Arlene Brophy learned the value of endowments from their own lives. Jere won the St. Mel High School scholarship from Loyola University, Chicago in 1958, and received his bachelor's degree in psychology from the Honors Program of Loyola in 1962. He was then awarded a fellowship from the University of Chicago where he received his PhD in Human Development and Clinical Psychology. Jere and Arlene were able to get married while he was in graduate school, in part because of his fellowship.

Arlene Pintozzi Brophy received her bachelors degree in education with high honors from the University of Texas. After working in MSU's College of Education with student teachers, she realized that her main interest was in children experiencing difficulties at school. She completed a masters degree in social work at MSU, and became a school social worker for many years.

In 1956, Jere and Arlene met at Marillac Social Center in Chicago where they both started working while in high school. Marillac was a settlement house operated by the Daughters of Charity, Catholic sisters who were social workers. Marillac was located in a changing neighborhood of the city, and Jere and Arlene worked there during the civil rights movement. Marillac greatly influenced Jere and Arlene to appreciate the importance of social justice. This experience gave them inspiration and motivation to strive to be the best they could be, and to help those less fortunate through the helping professions,  Jere as a psychologist and Arlene as a social worker. Jere and Arlene went their separate ways when they were in college, but after a short time, they were both eager to get back together, and were married in 1963. On the day of their wedding, the entire wedding party went back to Marillac House to celebrate their marriage with the sisters and staff.

After Jere completed his PhD Program, he devoted his life's work to furthering knowledge in education and psychology. Jere did  post doctorate work at the University of Chicago, and then spent spent eight years at the University of Texas. He came to Michigan State University in 1976 as Professor and Senior Researcher in the Institute of Research on Teaching (IRT). He served as Co-Director of the IRT from 1981 to 1994, and, in that capacity, convened scholars to share their works-in-progress through the “Invisible College” prior to the annual meetings of the American Educational Research Association. At MSU, Jere held the position of University Distinguished Professor, which is the highest faculty distinction in the university.

Jere's honors and awards are among the most prized in the fields of education and psychology. He received the 2007 E. L. Thorndike Award from Division 15 of the American Psychological Association. This award, signifying a career of distinguished contributions to knowledge, theory and practice in educational psychology was very special to Jere because it was recognition from his peers. Jere was elected as Fellow in the American Psychological Association, the International Academy of Education, the American Psychological Society, and the American Educational Research Association. He was also a fellow at the Center for Advanced Study in the Behavioral Sciences in Palo Alto, California during 1994-95 when he was on a sabbatical. He was elected to the National Academy of Education and was recognized with an Honorary Doctorate from the University of Liege, Belgium in 2004. He served on the editorial boards for many of the most prestigious journals in the field of education.

Jere was a prolific author who wrote over 300 articles, chapters  and books. Jere's work was as well known to practitioners as scholars. His research on effective teaching, classroom management, and student motivation influenced both theory and practice with lucid and incisive thought and writing. Later he applied these ideas to the construction of social studies curriculum and received the Award for Exemplary Research in Social Studies from the National Council on Social Studies. MSU dean Carole Ames said that it's hard to imagine an undergraduate or graduate student in education or psychology who has not encountered Jere's work.

Jere was known by colleagues as a generous mentor who warmly welcomed inquires,    paid careful attention to their writings and ideas, and offered helpful commentary and encouragement. They cherished his friendship, his genuine interest in other people, his laid back manner and his sense of humor; he was always ready for a good chuckle. As an adviser to graduate students, Jere created a safe place where they could stretch their thinking, take intellectual risks and grow as professionals. The College of Education at MSU aspired  to be the best education school in the country, and Jere embodied this special vision and spirit. When asked to serve on the Michigan Department of Education Social Studies Task Force, Jere graciously agreed and contributed long hours and substantial thought to development of the state's first social studies assessments. He brought honesty, integrity, genuineness, brilliance, gentle encouragement and authenticity to the field of education. Jere devoted himself to bringing light to the problems of education. He was a great scholar, and he had a sense of what was practical in the classroom. He was known for his eagerness to share his knowledge with teachers, students and colleagues always with a sense of respect and humility. He had a special gift for making that knowledge useful to each audience with whom he spoke.

Arlene's career paralleled Jere's in their shared commitment to the achievement and well-being of elementary and secondary school students. As a school social worker, Arlene worked with elementary and high school students who had learning, emotional and social difficulties. She facilitated elementary and high school groups on grief, divorce, addictions and  peer relationships. She taught parenting skills and assisted parents to facilitate their children's school success. She worked with teachers, school administrators and community resources to provide support for students and families. Arlene enjoyed working in the school environment, and felt that through her work as a social worker, she had achieved her life long goal of helping others.

After Arlene retired, she contributed to the MSU community as a member of the Board of the MSU Community Club (MSUCC), serving as President in 2005-06. She chaired the Volunteers for MSU, a group that is part of the MSUCC that volunteers facilitating MSU student groups in the Service Learning Program. She also served on the Board of the Community Volunteers for International Programs (CVIP), which is also affiliated with MSU.

Jere was a avid reader who read several books every week. He enjoyed music, and spent many evenings reading and listening to music. He followed the games of several sport teams especially the Chicago White Sox. During the MSU hockey season, Jere spent many Friday evenings at Munn arena with family members watching the Spartans play hockey. Arlene spent her free time reading, cooking, and playing bridge. The most precious time for Jere and Arlene were family gatherings with their children and grandchildren, and time spent together in northern Michigan hiking in the woods and  watching sunsets over Lake Michigan. Jere and Arlene's  relationship that started at Marillac House when they were young became more endearing over the forty-six years they were married. Having those years together, a close knit family and work that they felt passionate about gave both a desire to give back. Their hope is that this fellowship might enable a graduate student at MSU to find within Jere and Arlene's story a path for dedication to high achievement, a desire to create and further knowledge in education and to value integrity and generosity to others.